Sept. / Oct. 2019: Artistic residence of the artist Juan Carlos Delgado (1979 Lima – Peru). The artist has been working at Museum location, in order to set his exhibition ‘I’m only doing Comics’. Also he realized a big wall painting of 6 metres width in Museum M.A.C. House Leusden. Also during his residence in The Netherlands, he has been working on another big permanent wall painting, together with Manuel Azaro and the Special Artists of the Jans Pakhuys, Amersfoort at location ‘Elleboog’ in Amersfoort. 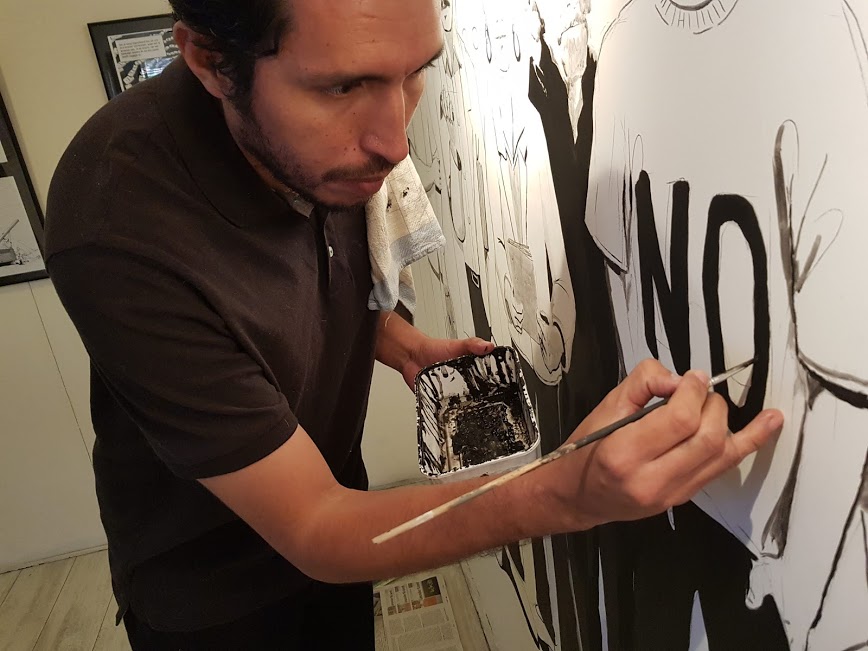 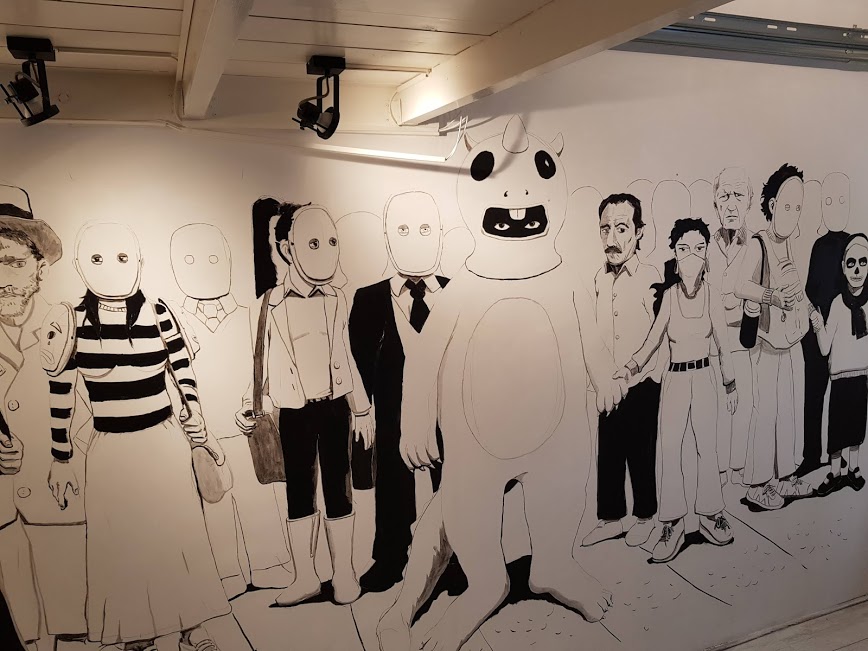 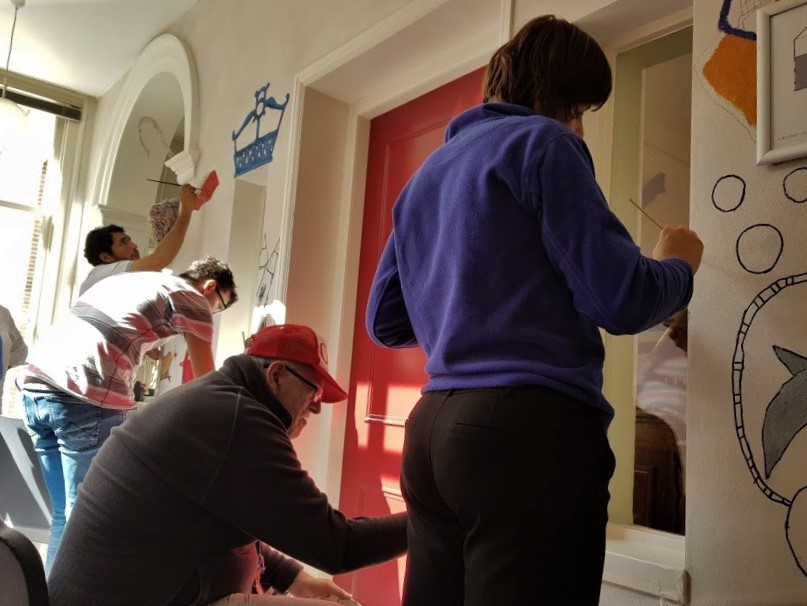 Juan Carlos on the left, working with the Special Artists of Jans Pakhuys on a permanent wall painting at location ‘Elleboog’, Amersfoort, Oct.’19

Oct. 2018: Artistic residence in La Casa Holandesa of Ernst Kraft, Malaga. During his residence the artist has realized his Solo Exhibition ‘Hekwerk’ in Museum M.A.C. House Leusden. The opening was held Oct. 7th ’18, by Mayor Bouwmeester of Leusden. On same date was held the Catalogue Presentation because of the 2nd Museum Party and Celebration of ‘6 Year Cultural Foundation La Casa Holandesa – Terra dell’Arte’, The Netherlands. Presentation of the Museum Catalogue by Art director, Margareth Degeling. On the left Mayor Bouwmeester of Leusden. On the right Ernst Kraft, Spain.

Augst 27th – Oct. 2nd.’18: Artistic Residencies in The Netherlands of the young and talented artists; Leonel, Luís and Lorenzo Torres Pacheco – Artistname ‘Trillizos Torres Pacheco’ (1996, Tijuana – Mexico). The triplet artists always work together on every artwork, therefore they present themselves as ‘one entity’, instead of being three different artists. They have participated in exhibitions in Mexico, Californië and Italy and in 2017 they have become prize winners of digital art constest ‘Ventipertrenta’, organized by Terra dell’Arte. During their Artistic Residencies in Museum M.A.C. House – The Netherlands, the triplets have been working on their exhibition ‘Cause and Effect of Human Emotions and Relations’. 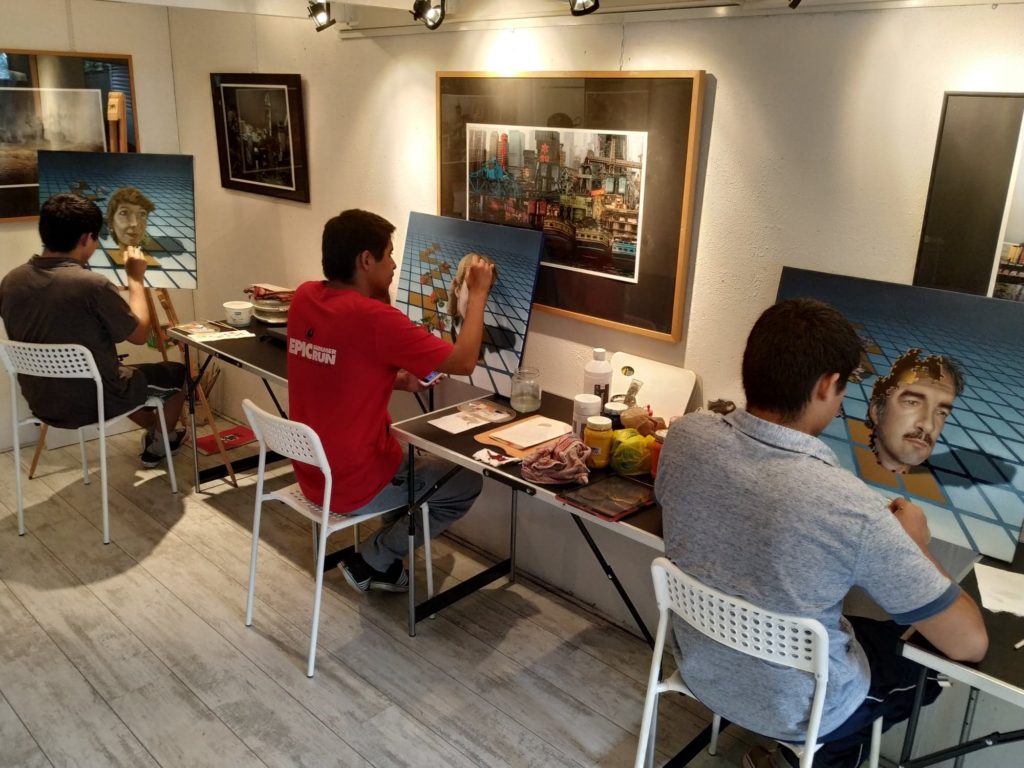 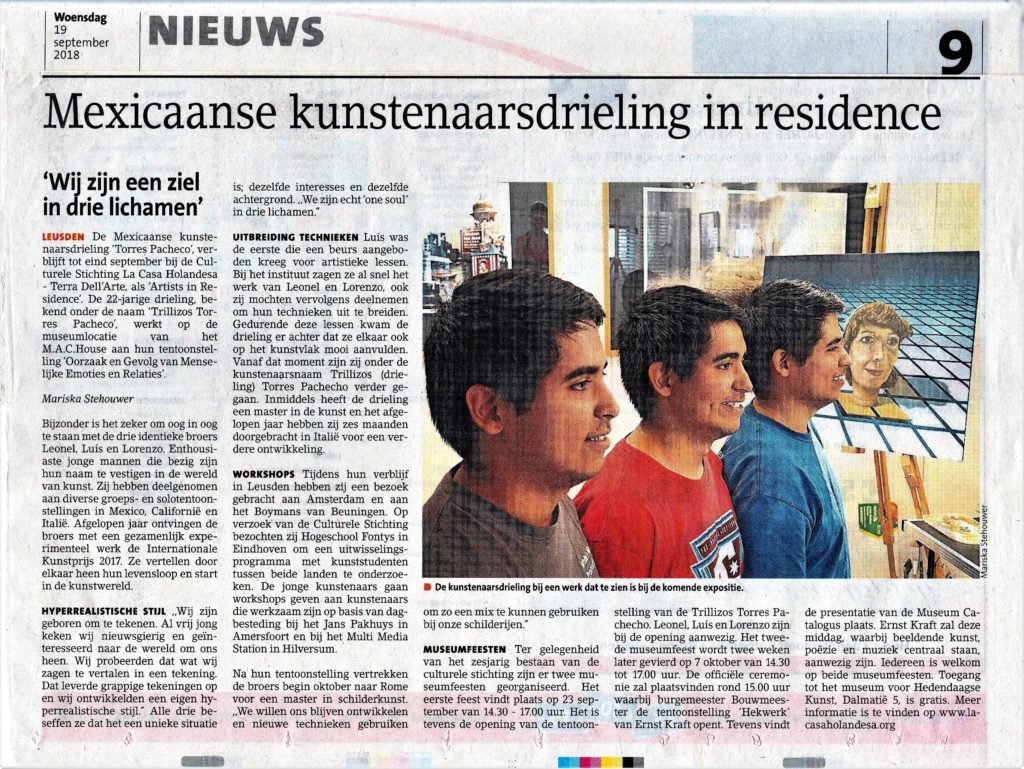 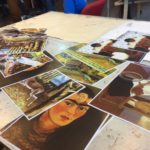 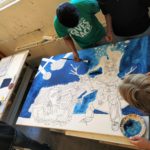 2017 April: Artist Werner Klompen, The Netherlands and his artist friends from Ukraine and Germany in the kitchen of La Casa Holandesa and at museum location, Museum M.A.C. House Leusden working on the Art Project and Art Performance ‘Black light Installation Boxes’: 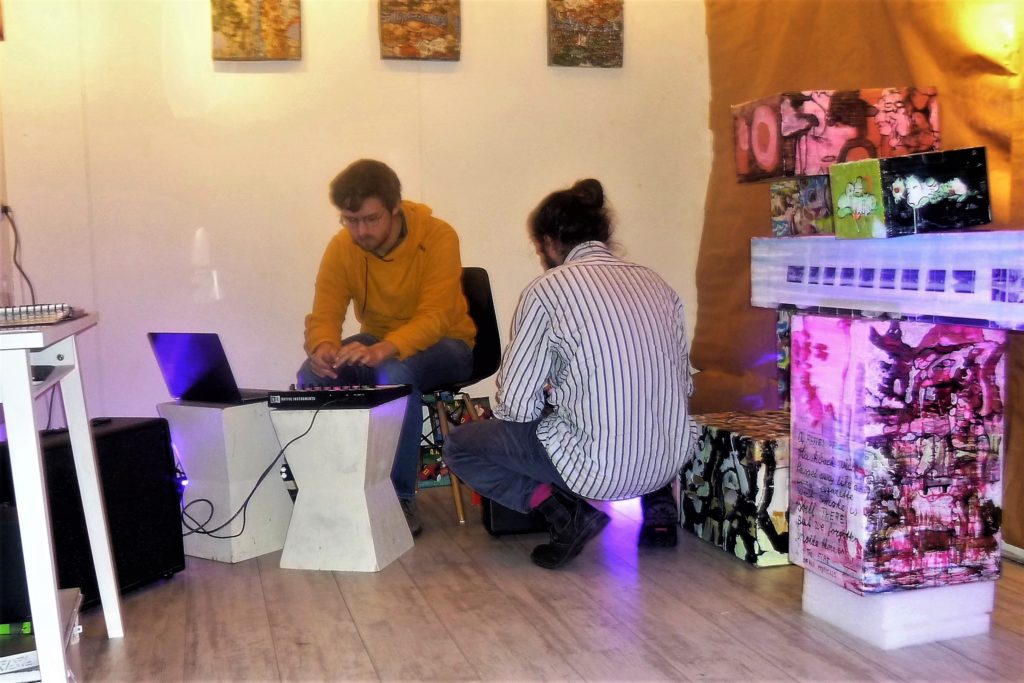 2016 April – May: Artist Mathieu Klomp, The Netherlands has been working for 6 weeks in residence, at museum location, in order to present and finish the Sculpture Group/Installation ‘Receiver’: 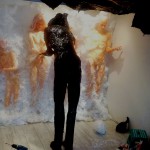 Cultural Foundation ‘La Casa  Holandesa  –   Terra  dell ’Arte’ is an International non-profit Cultural Organization in Leusden – The Netherlands and was founded in 2013. After working together, for

many years with Alfonso Caputo  and Laura Castanedo,  President and Vice-President of Terra dell’Arte and Project Ars Latina, we decided together to start our own Cultural Foundation in The Netherlands,  using the name “La Casa Holandesa – Terra dell’Arte”. The Founders of La Casa Holandesa have been working together with ‘Terra dell’Arte’ and ‘Project Ars Latina’, by setting up International Projects and Collective Art Exhibitions  in a.o. Italy (2006), Mexico (2007) and Cuba (2010).

Since Terra dell’Arte believes in  ‘ Cultural Exchange of Artists all over the world’, we try  to realize this goal by  working from our own  Foundations and from our own Countries, to the benefit of  National and International Artists by organizing Art Actions, Exhibitions, Art Projects and  Artist in  Residence  Programms in  our own countries. In 2014 our Cultural Foundation “La Casa Holandesa – Terra dell’Arte”, has founded a Museum of Contemporary Art:  “Museum M.A.C. House Leusden”, The Netherlands. Photographs of Guillermo and Margareth Degeling, made by journalist Hans Beijer of Leusder Newspaper at Museum location, oct. ’15.

Manuel Azaro, born 1995 in Zeist –  The Netherlands : Plastic Artist, also Secretary of  ‘Cultural Foundation La Casa Holandesa – Terra dell’Arte’, The Netherlands: Team member of Project DIN A4,  Assistant of ‘Museum M.A.C. House Leusden’, Membership as artist  of W-Afpiaap Project (World Wide Artists of Peace project), Membership as artist of Project DIN A4, 2015: Jury Member of National Art Competition ‘Special Art’. Manuel Azaro is also Visual Artist: Highlights in artistic career: He has participated in group shows  in Germany and The Netherlands and with W-Afpiaap Project in Turkey, Romania and The Netherlands. He has become  2nd Prize-Winner of Art Competition organized by ‘Idea Cultura’,  The Netherlands in 2012. As from 2014, he has also participated in group exhibitions in a.o. Jans Pakhuys, Amersfoort,  Museum Dolhuys, Haarlem, Museum M.A.C. House Leusden and Museum Nairac, Barneveld. In 2015 Manuel also participated in his first Biennale of Contemporary Art: ‘Art Brut Biennale’, Hengelo.

Your residencial period may be ONE OR MORE WEEKS.

We accept one,  two or three artists at the same residential period.

Why Residencial Period in The Netherlands?

Experiencing an artistic residential period in La Casa Holandesa can  give you a lot of opportunities:

In the the city of Utrecht you can visit  “Het Catherijne Convent”,  “Centraal Museum”. In the historical centre of the city of Amersfoort are located “ Museum Kunstkade”, “Museum Flehite” and “Mondriaan Museum”. Ofcourse you can also visit any other  museums or galleries in different cities all over the country.

What to expect in The Netherlands?

People:  Since The Netherlands is  Multi-Cultural,  besides Dutch people, many people with different backgrounds live in our Country. Most People  understand or speak various languages like Dutch, German and English.  In general  people on the street are friendly and willing to help you, if you have any questions.

Public Transport: Very good. Since The Netherlands is a Small Country and because of the fact that La Casa Holandesa – Leusden, is located in the Province of Utrecht, which is  the Centre of The Netherlands, many cities, like Amersfoort, Utrecht, Amsterdam, Rotterdam, The Hague, a.o. can be reached  easily by Public Transport.

Green Country: Also, The Netherlands is a very Green Country, surrounded by Water, with beautiful Lakes, Meadows and Villages.

How to submit your candidature:

Each artist has to send us the following documents by sending an e-mail to : lacasaholandesaterra@gmail.com

Since our Cultural Foundation “La Casa Holandesa – Terra dell’Arte” is a non-profit organization which receives no structural money from our government nor from any other Cultural Organization, we have to ask an application fee for your residential period in order to cover expenses.

For each Residence artist, the fee is Euro 30 for each day, including simple breakfast and dinner.

The artists, of which the candidature has been accepted, have to pay THE FIRST PART of the application fee, being 20% of the total amount NO LATER THAN  10 days, after having received our official invitationletter by e-mail. Immediately,  after having received this First part of payment, we will make the official revervation for the residence period. The remaining sum has to be paid NO LATER THAN  one week, before starting the residence.

How to pay Application Fee?

In case you will pay the fee by Western Union, send an e-mail to: lacasaholandesaterra@gmail.com with the following information:

Location:  La Casa Holandesa – Terra dell’Arte, The Netherlands is located in the Province of Utrecht, being the Centre of The Netherlands. Leusden is a very relaxed small village with  green environment,  swimming pools, various restaurants, 2 small shopping centers and Tourist Office,  which resources can all be reached by walking 10 minutes from  La Casa. Leusden is very near to the Historical Cities of Amersfoort and Utrecht, which cities can be reached very easily,  by taking a bus near La Casa. Also other Dutch cities can be reached very easily by public transport.